難しい英文和訳をお願いします” 【More money, more power, same old faces】 という題なのですが、三段落ありまして、どれか一つでも構わないので訳していただけたらありがたいです＃ よろしくお願いします” 【More money, more power, same old faces】 On the face of it,the spies have been punished for this failure in a curious way. They have been given vastly more money to spend. Their powers has been increased, particularly in surveillance. And, given the immensity of their failures, remarkably few senior spooks have been removed or punished. George Bush recently awarded the congressional medal of freedom to the CIA director, George Tenet, who reportedly called the evidence of、WMD in Iraq 'a slam-dunk'. In fact, both countries have now launched their most thorough intenigence reorgannization since the end of the second world war. In America, the change is more obvious. George Bush has appointed a new intelligence overlord who is supposed to bond together America's unwieldy 15 agencies (and a $40billion budget) :John Negroponte, the current ambassador to Iraq, goes before a Senate confirmation hearing next month. There is to be a new National Counter-Terrorism Centre. Mr.Bush has also installed a new director at the CIA, Porter Goss, who has caused a fuss in Langley by booting out a few of the CIA's top brass. And the CIA and the FBI, long reluctant allies, have been told to work together. Britain's intelligence service is much smaller than America's and heavily reliant on it, especially for high-tech data. But it is one of only three truly global services (the other is Russia's), and for histrical reasons is still rocked up to in the business. Its reorganization, on which a report is due to be presented to Parliament soon, has been more subtle than America's. It has its own new counter‐terrorism centre, but it hasb focused largely on setying up double-check systems to see that material is genuine and assesments are challenged.

More money has been lost remembering the depression than it was ever lost during it. の意味がはっきりしません。 どうか、わかる方、教えてください。 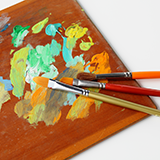 May I ask in which situations should I use "get better"? 上の文は正しいですか？

この文章のthanks to languageの挿入のルールがわかりません I thinkなどのSV 独立不定詞、分詞構文は挿入よく見ますが、動詞1個だけの挿入というのもよくある事なんですか？ Human beings,on the other hand ,thanks to language ,are able to pursue one purpose or to act in re...

翻訳お願いします！ こちらは重い物というのはバーベルやダンベルの事を指します。 Light 'em upというのはどういった意味合いでしょうか？ 宜しくお願いしますm(__)m Fire in your eyes, ice running through your veins, you are fixing to go into the void, nothing matters but ...

Can’t you take time off from work and make a vacation out of it? のout of it にはどのような意味、役割があるんですか？